Durres Port Authority in close cooperation with the Ministry of Infrastructure and Energy, for the second year in a row will be joining the activities of the International Maritime Organization (IMO) in observance of  the “World Maritime Day”, which this year brings to light one of the most important issues, the new technologies supporting a greener transition of the maritime sector.

In attention this year will be the reflection of the need to support a green transition of the maritime transport into a sustainable future, while leaving no one behind. It provides an opportunity to focus on the importance of a sustainable maritime sector and the need to build back better and greener in a post-pandemic world.

Promoting sustainable shipping and green maritime development is one of the major priorities of IMO in the coming years. Therefore, energy efficiency, new technology and innovation, maritime education and training, maritime security, maritime traffic management and the development of the maritime infrastructure, the development and implementation of global standards covering these and other issues will underpin IMO’s commitment to provide the global maritime transportation system.

For several years now, Durres Port Authority in observance of the “World Maritime Day” joins not only the activities organized by the IMO and other international maritime organizations, but has also undertaken a range of initiatives with the support of the Ministry of Infrastructure, which this year will be a multi-day event that is scheduled to begin on Monday (September 26th) and run through Thursday (September 29th).

Starting September 26th, this maritime week’s events will kick off with the Tirana Connectivity Forum organized by the Institute for Cooperation and Development (CDI), where the focus of discussions will be the safe and sustainable infrastructural development in the Western Balkans.

On September 27, a selected panel of national and international maritime transport stakeholders will discuss the development of port infrastructure and innovation in security systems.

Meanwhile, a two-day workshop will be organized in the premises of the “Hysni Aruci” Conference Hall on September 28th -29th. This major event is a co-organization of the Ministry of Infrastructure and Energy with the IMO, which will conclude the series of activities organized in observance of the World Maritime Day in the Port of Durres. The focus of this workshop will be the “International Convention on the Control of Harmful Anti-fouling Systems on Ships” (Anti-Fouling 2001).

Since January 26th .2022, our country, as a member of the IMO, has acceded to the International Convention which prevents the use of harmful paints used on ships and establishes a mechanism to avoid the further use of other harmful substances on board ships in the future.

Last year, in the framework of the World Maritime Day, the Ministry of Infrastructure and Energy, the Transport Community Secretariat and the Durres Port Authority hosted the Regatta Conference on the development of maritime transport. For the first time, European and regional stakeholders of maritime transport gathered in a dedicated conference, with the participation of several Transport and Infrastructure Ministers from the region, representatives from the European Commission, the World Maritime Organization, the European Seaports Organisation, leading Port operators in the Adriatic-Ionian region and civil society.

The activities will be held in the premises of the Port of Durres Fishing Terminal and the “Hysni Aruçi” Conference Hall. 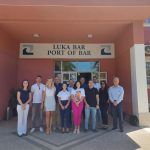 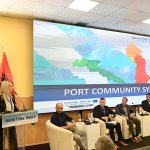