Wheat has been one of the principal  agricultural commodities handled over the first five months of this year in Durres Port. According to statistics over 105 thousand tons of grain have been handled at the Western Terminal during  January-May 2020.

As reported by the DPA Statistics Department a consistent growth of 74% in  grain processing rates is reflected comparable to the same period January-May of the previous year.

In the course of these five months, 27 wheat bulk carriers have been handled at the Durres Port Western Terminal,13 of which were processed during April 2020.

In addition to mobile funnel flows, grain discharging operations are being carried out in 5 silos installed at the No. 2 pier of the country’s largest port.

During the first five months of the preceeding year over 60,166 tons of wheat were processed in the Port of Durres. 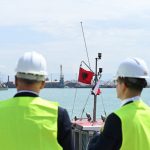 The British Embassy strengtheningcooperation with Durres Port June 9th 202009/06/2020
DPA Statistics / Over 1,532 thousand tons of freights handled in the course of the first five months, indicating an increase of 10% in merchant ships processing rates/ June 15th 202015/06/2020 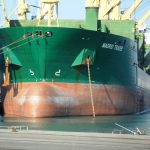