The Ambassador of the United Kingdom to the Republic of Albania, H.E. Mr. Duncan Norman MBE., paid an official visit today to the Port of Durres, where he was received by the head of Durres Port Authority, Mr. Pirro Vengu. During the meeting, the ambassador was offered an extensive overview on the port operational capacities, coping with the #Covid19 pandemic situation as well as its economic impact.

Durres Port Authority, CEO Mr.Pirro Vengu, informed the ambassador on the latest reforms undertaken in the country’s largest port emphasizing the vital role of the Port Authority in facing the state of national emergency by providing stable logistic capacities in terms of freight transport during this period of crisis.

In addition Mr. Vengu stressed the steps taken by the Durres Port Authority to benefit from the expertise of some of the main international agencies, focusing in the coordination of legal grounds and law enforcementactivities in port areas.

In conclusion the British delegation enjoyed a tour at the Western and the Container Terminals, where they got acquainted with the port infrastructure as well as potential investment prospects in terms of operational capacity expansion and enhanced service facilities. 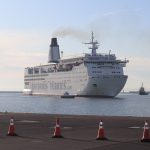 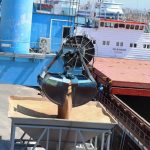