The Port of Durres hosted a German delegation led by Dr. Joachim Stamp, Deputy Prime Minister of the Nordrhein-Westfalen Land and Minister for Children, Family, Refugees and Integration as well as the German ambassador to Albania Mr. Peter Zingraf. The meeting was organized in the framework of the CDU-FDP Land governing coalition program, held in our country on 25-27 February.

The delegation was received at the Durres Port Authority premises by the Chief Executive Officer, Mr. Pirro Vengu. Following the welcoming remarks, Mr. Vengu briefed the German representatives on the designated policies and strategies adopted by Albanian port authorities on issues concerning good governance promotion, level of competitiveness as well as key practices considered critical for the acquiescence and compliance with the European standards.

Mr. Vengu further on appreciated the successful co-operation with the Port of Hamburg in Germany on the joint initiative for the establishment of the Albanian Maritime Management Center of Excellence in Durres focusing on maritime transport engineers and professionals training.

The German authorities after being acquainted with the country’s largest port capacities exchanged views and expressed keen interest on the currently implemented projects in the port areas. They were also informed on the additional measures implemented at the port border 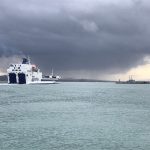 Postponed Durres-Bari ferry routes due to adverse weather conditions resumed their journeys this morning. Cargo ship operations proceed unaffected by the harsh weather February 27th.202027/02/2020
DPA: Over 300,000 tons of cargo processed during January 2020 An increase of 12% regarding imports and an estimated 9% on exports February 28th. 202028/02/2020 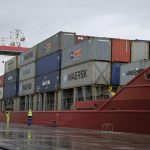 History/”Our Port Along the Years”- Photo portfolio of Durres Port after the 1930’s February 10th.2020