Open port in support of the “One Step for Durres” initiative On Sunday morning Durres Port opened his gates in support of the “One Step for Durres” initiative.

The aim of this marathon that involved participants of all ages was not intended for the race itself – reported the organizers.

Its mission was to inspire and raise awareness on local community earthquake relief support while the Port Authority joined the cause by adding to the race’s route, the itinerary throughout gates 1 and 2 of the country’s largest port entrance points.

Youngsters and seniors, locals as well as Kosovo and several international citizens, combined efforts either by running or marching. The marathon started passing through the iconic city centre “Lirija” square towards the main entrance of Durres Port.

After a 5km run, under the auspices of the Durres Port Security Forces, runners headed back the city’s main square exiting through the port entrance No. 2. Durres Port Authority has always been a great aide and ally to civic initiatives aiming the support and vigor of the city and its citizens 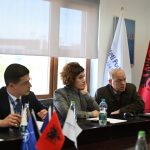