Durres Port’s popularity as a cruise destination has been growing strongly among international tourists visiting the country each year. During 2019 the largest Albanian port has been visited by 19 cruisers and sailboats as well as 430 yachts carrying 4.503 tourist.

According to the Durres Port Authority Info Center this year is poised to reach new heights and break new records with a forecast of steadily increasing number of tourists as well as prominent cruisers visiting the city such as: La Belle De L’ Adriatique which will be the first to visit on May 5th, while up to September 22nd  it is scheduled to berth the Durres Port quays five more times.

On May 9th is also expected to visit our country for the first time, Britain’s newest built cruise ship “Spirit of Discovery” with length(LOA) 236m/774 ft and Gross Tonnage of 58250 gt.

“Sirena”, “Seven Seas Voyager”, “Amera” are some of the prominet cruisers visiting our city in the past while this year the list is extended with several famous cruises such as:”Silver Shadow”, “Caledonian Sky” or “Sea Burn Ovation”, which will be first time visitors of  the country’s largest port.

The tourist’ sailboat “Sea Cloud” an old visitor of Durres Port, will berth twice this summer at the port  quays .

In addition to the cruise ships a considerable number of tourists yachts are expected to chose Durres Port among the idyllic bays to anchor by during their sails.

Durres Archaeological Museum hosting dozens of artifacts from underwater discoveries February 13th. 202013/02/2020
Open port in support of the “One Step for Durres” initiative24/02/2020 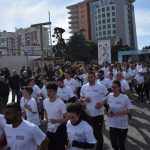