Disaster and crisis management through acclaimed French expertise support provided via training sessions and certifications of civil emergency staff as well as cooperational extention and consolidation, was in focus of the meeting held between the “French-Albanian Friendship Group” and Durres Port Authority executives.

Deputies of the National Assembly of France, Mrs. Mireille Clapot and Mrs. Valérie Thomas, Ambassador of France to our country, Mrs. Christina Vasak, as well as representatives of Aides Actions Internationales Pompiers, were briefed during the meeting on Durres Port’s potential highlighting it’s fundamental role in the overall development of the city as well as our country.

Subsequently, Durres Port Authority CEO, Mr.Vengu expressed his sincere gratitude for the immediate response and invaluable aid provision of the French goverment in facing the post quake emergency in the areas affected in the aftermath of the devastating earthquake that struck our country on November 26th.2019.

Further on, parties discussed joint initiatives on exploring new cooperational opportunities while adopting the French paradigm in this regard.

In conclusion, the French delegates paid a visit to the Durres Port operational quays. 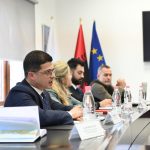