From January to June of this year, the goods for import / export from / to Durres were transported by ship to 55 ports in 19 countries of Europe, Africa, Asia and America.

From the Statistics Sector data it is learned that ships departing from Durres with exporting goods or that have arrived at our country’s largest port with importing goods have stopped at 19 ports of Turkey, the country with which they were exchanged 19 percent of imports and 8 percent of exports from Durres.

Goods launched from / to Durres are also processed by ships at 9 ports of Italy, on 6 Russian ports and other 4 in Greece. 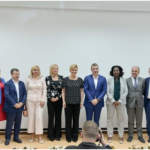