APD: Visit of Croatian President Ms. Kolinda Grabar-Kitarović to the Port of Durrës The project value of EUR 230000 is funded by the Croatian Government and implemented by UNDP in cooperation with the Ministry of Environment and Tourism.

The project addresses the needs for an inter-institutional platform for coordinating the system’s preparedness to respond to emergencies, oil spills and other hazardous substances in marine environments, including public and private sources.

Ms Kolinda Grabar-Kitarović, Croatia’s President accompanied by the Croatian Ambassador to Albania, Sanja Bujas-Juraga, Mr. Damian Gjiknuri Minister of Infrastructure and Energy and Mayor of Durrës City Mr. Vangjush Dako visited the Port of Durres within the framework of the 3-party Project for the Management of Marine Pollution. In their visit, the authorities were attended by the Director of APD, Afrim Bakaj and other heads of interest in Port.

During her speech, the Croatian President praised the early cooperation between the two countries and emphasized the importance of this project for the coastline and the Adriatic Sea. 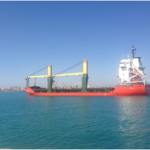 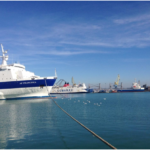