85,000 containers handled with 1 million tons of goods in 7 months

Since the beginning of this year, approximately 85,000 TEU have been loaded / discharged at the Container Terminal in the port of Durres, or 5,700 TEU more than in January-July 2018 – the Statistics Sector reports in APD. Statistics also show that in the first 7 months of this year, 113 specialized ships were handled in the quays of the respective Terminal. Although the number of boats is about the same as last year, the numbers of TEU as well as the quantity of goods in containers have been increased significantly – statistical sources added. During January-July 2019 the volume of containerized freight in the port of Durres exceeded 1 million tons. 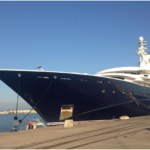