During January – May of this year in the port of Durrës are handled nearly 80 thousand tons of goods more than in the same period of 2018.

Figures have been made known by the Statistics Sector in the APD, and according to them, during these five months, vessels and lines ferries have handled nearly 1 million 645 thousand tons of goods, or 5 percent more than in the first five months of the year 2018.

Most of the goods, about 70 percent, are handled by 254 merchant vessels that have been berthed on the quays during the 5 months, while 30 percent from the trucks and trailers transported via ferries, Durres – Bari, Durres – Ancona and return. 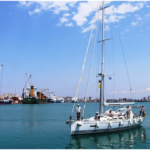