Norwegian embassy staff, visit the largest port of the country May 15, 2019 In introducing the country’s largest port, specialists of the Promotion Sector in APD, presented the capacities, current developments and projects being implemented in the port area.

Ambassador Per Strand Sjaast, after praising hospitality, said cooperation with the Port of Durres has taken the course of the project that Norway is already funding “Marine Industry – a New Growing Sector in Albania”.

Attendees sought to know more about the investment in dredging of the port, as well as projects aimed at enhancing the port capacity in the future.

Embassy members, together with Ambassador Per Strand Sjaastad, paid a visit to the General Goods Terminal as well as to the Ferry Terminal.

The visit to the port of Durres took place within the framework of the Constitution of Norway. 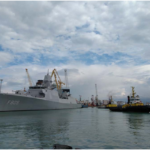