During the first four months of this year, ferries from Durres – Bari and Durrës – Ancona return lines have been used by 160 thousand domestic and foreign passengers.

The figure is 1,481 passengers higher than the same period last year – is learned from the statistics section of the DPA.

During the same period, the ferries have also transported a total of 28,944 cars, as well as 24,946 trucks and trailers .

The number of Albanian travelers who have preferred ferries is about 108,000, while that of foreigners 39,259 passengers.

The ferries have completed 308 round trips, transporting 296 thousand tons of freight in trucks and trailers simultaneously. The figures are higher than those of January-April 2018. 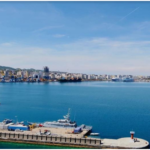