The Sector of Statistics of APD has announced these days intermodal transport data by vehicles which, after arriving at the port, continue to travel to other countries in Western Europe or in the Balkan countries. Most of the cargo and goods transported in trucks & trailers by ferry with the intermodal transport system, belong to the Bari-Durres line of return, with a total of 354,588 tons.

267,243 other tons are transported with trucks and trailers through the Ancona line – Durrës return. 12 thousand tons total has been directed to Trieste, or has arrived from this port in Durres.

In the year that we left behind in the port of Durres, we have arrived with nearly 40,000 truck & trailers in total, while more than 36 thousand have left.

According to specialists in the Statistics sector, Intermodal Transport – is the movement of goods from origin to destination using a several modes of transport. 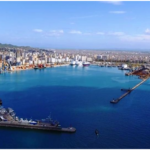