Representatives of the Port Authority have organized in Durrës Municipal Council Hall, the successive meeting in the framework of the LOCATIONS project: “Low Carbon Transport in Cruise Destination Cities”.

Durres Port and Transport Institute in Albania are Albanian partners and together with six port cities of Europe and with other partners have joined forces to improve logistics related to navigation and transport planning.

Cruiser Tourism is a new sector in Albania. The most developed ports for cruises or cruise ships are Durres, Vlora and Saranda.

According to data from DPA Project Sector, Durres Port represents the main entrance gateway to Albania, and its traffic load is mainly generated by Mediterranean countries. The Locations Project is working to create a dedicated development and testing methodology to respond to the individual needs identified in the city ports involved.

It is intended to set up packages of measures that will contribute to the visibility of urban traffic and reduce pollution in the environment, packages designed to be easily transferred to other ports in the Mediterranean areas – the Project Sector underlines.

Specific sensitizing campaigns are envisaged to encourage the involvement of travelers and citizens to take responsibility and improve the quality of life in cities. During the meeting were screened documentaries and materials prepared by the Project Sector in APD.

The LOCATIONS project, funded by the European Regional Development Fund, is coordinated by AREA Science Park of Trieste and developed in the Friuli Region in Venice in collaboration with the Trieste Port Authority and with the support of the City of Trieste and the Regional Authority Giulia Friuli Venezia. The partnership counts over 20 organizations and institutions from Italy, Croatia, Spain, Portugal, and Albania. The Transport Institution and Durres Port Authority are the two Albanian partners of the project and with the support of the Durrës Municipality, as the project’s supporting partner. DPA: The General Director of DPA Expects the Ambassador of Turkey in our country. Interest of Turkish diplomacy and business to increase trade exchanges between the two countries November 21, 201821/11/2018
DPA 2018, 9-month freight exchange: Russia, Turkey and Italy, first 3 countries for import-export from Durres October 23, 201823/11/2018 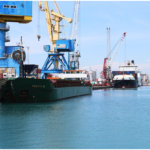