During January-October this year, the ferry lines Durrës – Bari – Durrës – have been used by nearly 757 thousand domestic and foreign passengers with over 161,000 passenger cars.

From the statistics sector of the APD, it is learned that about every five passengers, ferries have transported a car. Whereas, the number of foreign passengers who prefer ferry lines has been increased; during these 10 months statistics show a declining number of Albanian travelers.

During the 10 months we left behind, the ferry boats have transported over 226 thousand foreign passengers, or 11% more than the same period of 2017. 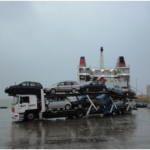